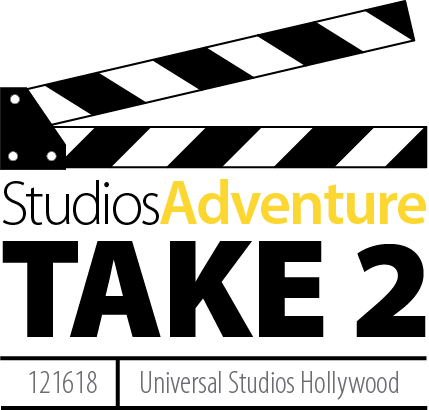 On December 16, 2018 the Third Gate Games crew hosted StudiosAdventure Take 2 at Universal Studios Hollywood. Our second puzzle hunt at the southern California park incorporated the added fun of holiday theming in some of the quests.

On the morning of the event, 13 teams gathered at Universal CityWalk. Upon check in, each team picked a day on the Grinch advent calendar and removed the small movie figure behind that door. That treasure would factor into a quest later in the day. Chris from Inside Universal was there to support the teams and wish them luck. After the customary orientation, game play, and rules presentation from Joe, Chris Metzger handed out the game packets. After studying their materials, teams headed into CityWalk and the park to tackle ten quests, Who Spys, and trivia amid the crowded walkways filled with holiday visitors.

Teams turned in their completed packets by 3:30 p.m. Awards were handed out at an informal post-event gathering after all grading was completed.

Paparazzi (10 points)
Remember those Grinch movie figures the teams collected at sign-in? This is the quest where they came into play. Teams had their picture taken with their figure, and then posted it to Twitter with the hashtag SATake2 to receive credit. Since StudiosAdventure doesn’t allow teams to use their phones, they could either get a non-player to help, or return to StudiosAdventure Central for help from the Third Gate crew. One team was lucky enough to have Scooby-Doo and his gang pose with them for their picture. Apparently, those meddling kids thought they could be of some help since they are experienced at solving mysteries.

Something Money Can’t Buy (30 points)
To keep with a holiday theme, teams went on a “shopping spree,” searching the streets of London, Paris, and New York to find the stores where they could “purchase” items from a shopping list. Numbers next to the list items indicated the desired letter from the associated store’s name, which were used to spell out the name of an additional item: Specialty Bread. The store where this item was found was the final answer to the quest.

It’s the most wonderful/awful time of the year: Grinchmas! Teams searched the Grinchmas celebration area to find the answers to eight questions. When placed in a grid, these answers provided the basis to decode the final question. Teams counted over the indicated number of letters to spell out a question: “What does Who Hash contain?”

This holiday entree proved elusive to some teams, and is found on the outside of the circle that encompasses the Grinchmas play area.

Cloak & Dagger (40 points)
The Wizarding World is delightful at holiday time, full of snow, sparkle, and song. Given incomplete sets of words from the area, teams searched for the missing items to eliminate letters from the given letter cloud. After crossing off all the letters from the located missing items, five letters remained, which unscrambled to “Paris.” The final answer required teams to locate the other two items that made up this set, found on the Gladrags Wizard store sign.

Some teams needed clarification that the letters did not unscramble to spell pairs.

Field of Dreams (40 points)
The very crowded Springfield area is full of The Simpsons references everywhere you look. For this quest, teams were given a list of small words contained inside longer words, and had to fill in the missing letters once they located the desired answers. Once all of the large words were located, the numbered letters, when read in order, informed teams what they needed to find.

Do you think they have considered selling that flavor in the park? 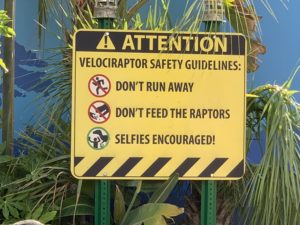 The lower lot is home to the Transformers ride, and the evil Decepticons seem to have meddled with the photos for this quest. Words were removed from images, requiring teams to locate the pictured items in order to decode the provided text. Teams used the indicated letter from each word to decode the final question.

Hollywood Story (50 points)
Architectural details are what make theme parks stand out from any run of the mill amusement park. Once teams entered the park, they had to keep a sharp eye out for the items in the provided photos, including what order they were in and whether they were on the right or left. If an item was on the left, the letters from the left side of the image were used, and vice versa. Last minute changes had to be made to this quest the night before the game, because planters can be moved!

Entering the letters into the provided grid sent teams looking for a “List of time zones below clocks in Starbucks from west to east.” However, the puzzling didn’t end there. After entering the time zones into a different grid, teams decoded them by adjusting forward or backward in the alphabet to yield the phrase, “The Mighty Bean.” Careful teams read the instructions and knew that they needed to find the home of this item as their final answer.

Outside the Wall (50 points) 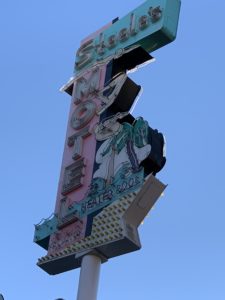 Most teams chose this as their first quest to work on since it was located in CityWalk, where the game kicked off. A series of eight multiple-choice questions provided the key to determine how to set up a maze grid. Once a correct answer is located, the indicated walls are filled in on the corresponding space of the maze to form the pathways. Many teams had to make multiple trips through the area to gather all the data.

Once teams completed maze, they found the one clear path starting from the letter in the center and crossing over numbers along the way. These numbers informed the teams what letter to use next depending on how far forward or back in the alphabet they were from the previous letter. Upon exiting the maze, teams had successfully spelled out the final question.

As you head toward the park entrance, the motel’s old-fashioned neon sign hangs high above the stores on the left-hand side. A dip in the pool there will be pleasantly warm.

Primary Colors (50 points)
A new style of game to our Adventurers required them to match colors from a set of provided paint swatches to items around the Minion’s Super Silly Fun Land based on black and white photos. Colored swatches came on a sheet of perforated paper that were separated into individual chips so that teams could place them in numbered order according to the pictures they matched. Once lined up in proper order, the three lines of letters spelled out the final question.

The flyer on the backside of the entrance arch to the land tells you how to win this prize.

Stick (50 points)
Who doesn’t love stickers? Teams were told to find the mural on the animation building and recreate a portion of it using the two sheets of provided stickers. The final layout was eight stickers high and fourteen stickers wide. Once the stickers were properly placed, a path through them was revealed with a series of letters and arrows. Teams followed the path starting in the top left corner in the direction of the arrows, writing the letters they crossed along the way to spell out the final question.

The court proved to be a tough find for some teams who forgot that the morning briefing from Joe indicated that answers to quests will be found in the same vicinity as where the quest data was collected. The Laemmle Court is located on the opposite side of the animation building from the mural. Counting the fish wasn’t as tough as it sounds. They are tile fish embedded on the floor of the fountain.

Who Spy (5 points each)
For this holiday version of Eye Spy, teams received cropped images of holiday decorations throughout the park. Teams had to answer “Who” questions for each picture to receive credit. The question from the lower lot, “Who can you meet here first?,” turned out to be trickier than planned. It seems that Universal changes the schedule board at this location throughout the day, so depending on when you searched for this one, your answer could be different. Teams who filled in any character name that is at this meet and greet location were given full credit.

Full results are available at the StudiosAdventure website. The total possible score was 530 points.

With their second consecutive first place finish, YM’s Majesty are poised to be crowned the first StudiosAdventures Masters! 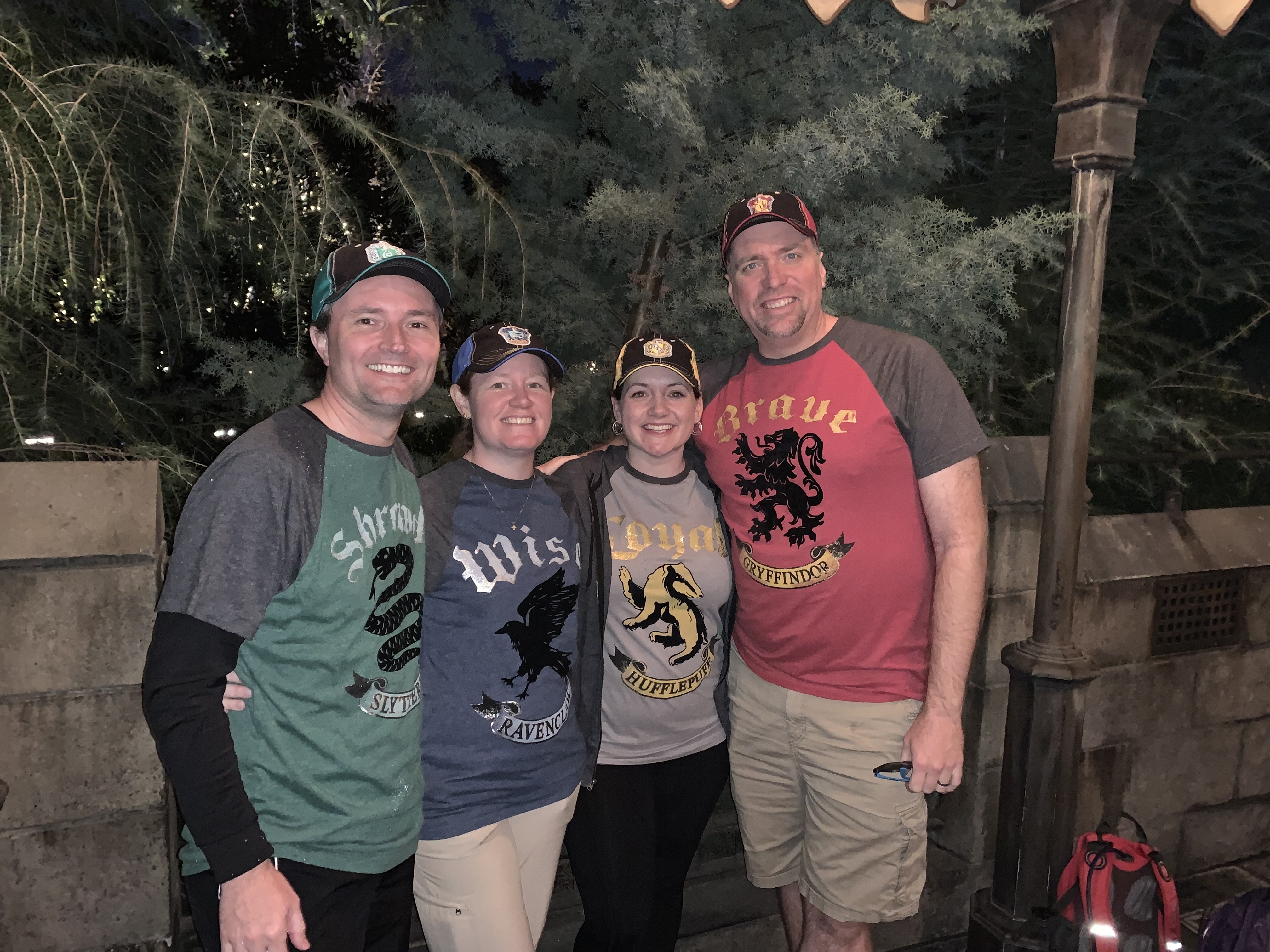 Thank you to all of the teams who took the leap to try our event outside of the Disney parks. If you’d like to look at the photos we took during the game, visit our online photo gallery.

Thank you also to Inside Universal for their assistance with planning our event.