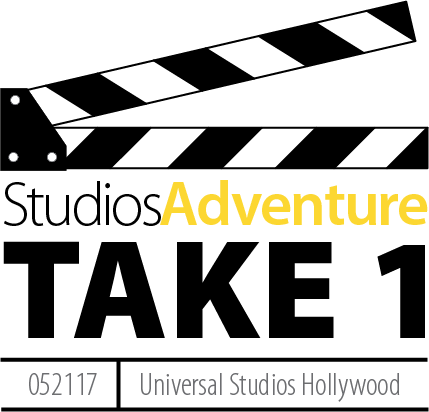 The inaugural StudiosAdventure at Universal Studios Hollywood took place on Sunday, May 21. It was Third Gate Games first Adventure to expand outside the boundaries of the Disney parks. Joe and Chris met players at CityFood in the Universal CityWalk for registration & sign-in, then a quick “Welcome To Our Game” orientation. Once everyone had been briefed, they were let loose on the park around 10:30 a.m.

Teams were free to tackle the eleven quests as they deemed fit; some MouseAdventure veterans took a look at the game and figured out the best path through the park to maintain a good pace. It was a nice day at Universal City, but possibly a little warm for some – temperatures hit about 90° in mid-afternoon.

Teams were required to turn in their completed packets by 4:30 p.m. Awards were handed out at an informal post-event gathering after all grading was complete.

Paparazzi (10 points)
One of the rules of the game is that you can’t use your smartphone or camera. This might seem cruel and unusual punishment in today’s world, but we do it so that players can’t take a lot of pictures and then sit at a picnic table and play the game. Because of this rule, StudiosAdventure Teams were thrown a bit of a curve ball in their first quest, which required them to get their picture taken with their Third Gate-provided Minion and then tweet the image. Teams could either get a non-player to help, or return to the StudiosAdventure central for help from the Third Gate crew. 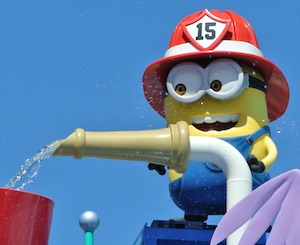 For this quest, eagle-eyed players had to match a set of Minion eyes with an item that that Minion was holding or associated with. When the correct pair was identified, players drew a line between the eye set on ones side of the page and the item on the other, crossing over a word in between. After all the eyes had been matched, players would then read the intersected words down the page.

Red Carpet Entrance (20 points)
On the main drag at Universal Studios, a variety of Hollywood-inspired buildings can be found. Players had to wander through and find missing words in signs, posters and windows. Once they had the 12 missing words, they used an index on the back of the quest to figure out which letter of which word was needed. For example, the first letter to descramble was D1, or the first letter for the answer marked D, which was Import. After all 46 letters had been decoded, the final question asked: In what apartment can you get actors headshots taken? A quick look around would locate the sign in a nearby window. 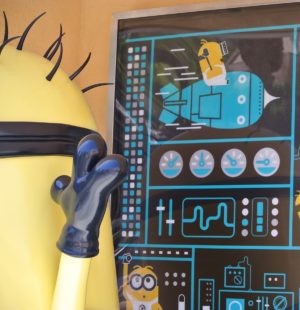 In the lower lot, teams were directed to find a large Minion standing in front of a window with graphics on it. In the upper left corner of this window was a three column pattern that could be matched to the back of the quest. The instructions explained that the players would use the letters corresponding to the blue boxes in the diagram to decode this task. In order for this to not be too easily solved, the letters formed a question read vertically.

This plaque can be found located on the pathway to Panda Express.

Movie Magic (30 points)
One of the coolest parts of the Wizarding World of Harry Potter is the opportunity for potential wizards to practice their spell casting. In this quest, teams had to locate the provided spell shapes, and write down the spell’s incantation (associated word or words). The number underneath each image indicated which letter to use from the spell for the final question.

Stunts (30 points)
Teams were treated to the delights of the WaterWorld Stunt Show, but they found that they had to pay attention and answer eleven of our questions. Once the show was over, teams then had to use their answers to make a fairly complicated math equation to determine the final water level. 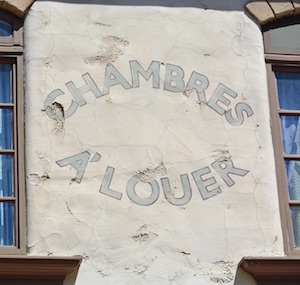 Third Gate Games really likes word searches. So much so that we usually provide players with grids of letters and a couple of small hints about what words they should find. Sometimes players finish the word search before they’ve even found the actual source, and other times, players walk back and forth through a given location unable to find that one important last word. This quest involved lots of French words found in the European section of the park.

Teams located the signs in images, and identified the words removed from those pictures. Once all sixteen words were found and located in the word search, the remaining letters in the grid revealed another question

Ms. Lamour’s age could be calculated from the plaque celebrating her 80th birthday, located under the large Rue De Lamour sign.

Taglines (40 points)
The Universal CityWalk opened in 1993, and it seemed a great opportunity to us to send players in search of things in amongst the water features, lots of people, and a little bit of shade. Looking for slogans or statements, players had to then fill in a colorful crossword puzzle. Once the puzzle was complete, letters in colored boxes unscrambled to form a final question, with each color group forming a single word.

This could be found via a map on the outside of Bubba Gump Shrimp Co.

Jurassic Park has been a fixture at Universal Studios for quite a while – who doesn’t love dinosaurs? Teams were directed to find a large dino-chart and then match colored tiles with the chart. The tiles that the teams were provided with also had letters underneath. Once all the tiles were placed in the correct order, the letters spelled out a question.

European Sets (50 points)
Teams were assigned to scour the Upper Lot Westminster area for sets of things, and to identify the missing member of the set. For example, there is a window labelled Dresses Suits Shirts, but we only provided the first and last words. Once teams had all the missing items, they then had to remove the letters from those missing items’ words from a group of letters provided on the front of the quest page. The remaining letters unscrambled to spell a word.

Scoring (50 points)
Heading into the Springfield area of the park, players were tasked with finding 6 theme clues and using 7 decoding bands to solve this quest. Once torn apart, the paper strips could then be wrapped around a tube (made out of, for example, the StudiosAdventure quest pack) and then rotated back and forth until words and clues came together. The 6 clues yielded the following words/letters, WHEN / IS ST / US DIS / CO CL / OSED / UNTIL.

Hidden Quest (20 points)
Sometimes, an Adventure from Third Gate Games might include an additional quest that is hidden inside other quests. With this particular Adventure, it was hidden inside the Award Season quest. As discussed earlier in this article, players were asked to decode a colored grid of squares against a key given to them on the page. Players were specifically directed to decode the blue squares. If players decided to decode the grey squares, that would then direct them to also decode the white squares.

Please take to our brief survey to let us know how you heard about this game, and what you thought of it. If you don't mind us contacting you to get more details, you can also give us your e-mail address

Full results are available at the StudiosAdventure website. The total possible score was 490 points. 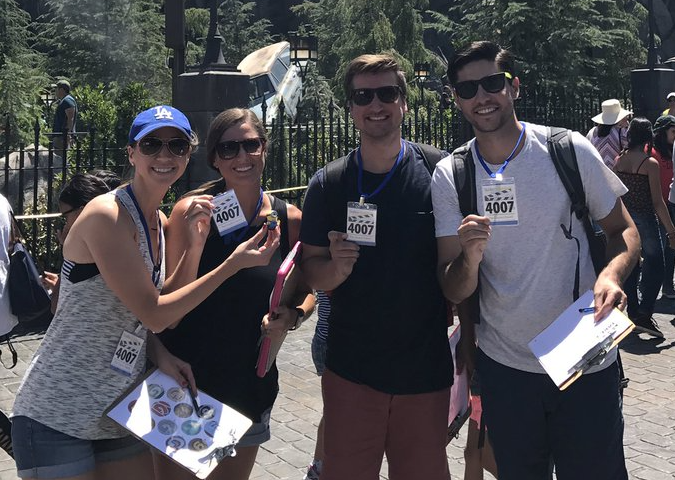 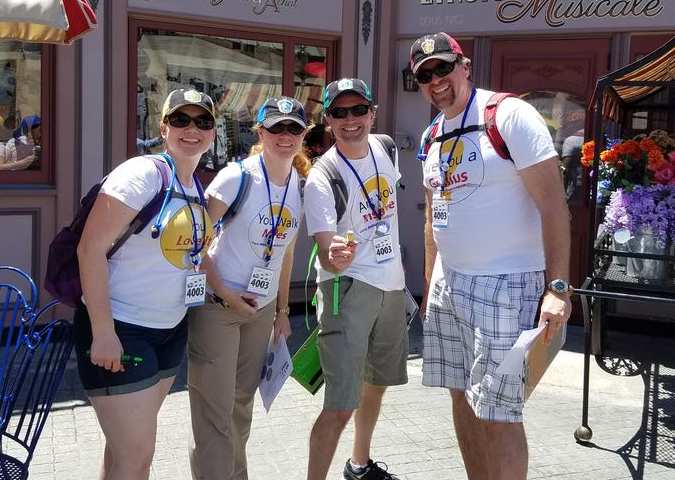 Thank you to all of the teams who took the leap to try out our inaugural event outside of the Disney parks. If you’d like to look at the photos we took during the game, please go here. If you think you’d enjoy our game-themed Spotify playlist, take a listen here.

Thank you also to Inside Universal for their assistance with planning our event.